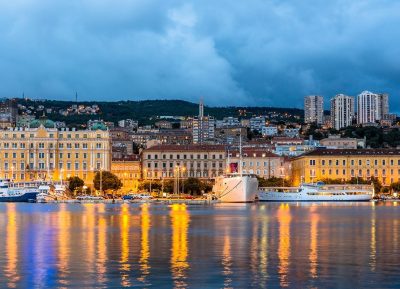 Rijeka is second largest coastal city in Croatia (after Split) and is nicknamed “The city that flows” as Rijeka in Croatian language means river. River is the meaning of her name also in Italian – Fiume, Slovenian – Reka and historically Flumen in Latin.

Rijeka is a city with turbulent history (has been part of 12 different states in the past century) that has developed into a unique, multinational, multi-religious and multicultural city with a vivid cultural and artist scene.

The city has never put much emphasis on tourism and this is what makes it even more interesting for someone visiting Croatia.

ELINE is moored in a quiet corner of the biggest Croatian harbour, just in a vicinity of a city centre and historical city market.